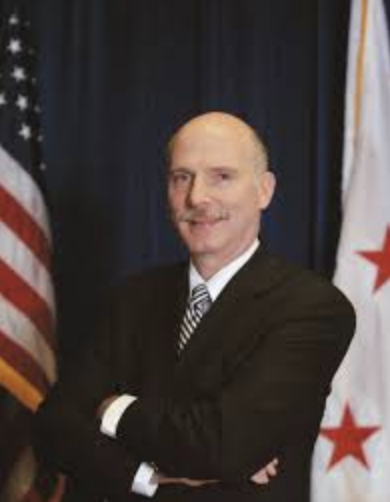 Phil Mendelson was first elected to the Council in November 1998 as an At-Large Councilmember. He served the District in that role until June 2012 when, following the resignation of the previous Council Chairman, Mendelson was selected by his colleagues to take over that role. In November 2012, 2014 and 2018, District voters elected and re-elected Mendelson as Chairman of the Council.

As Chairman, Mendelson leads the Council on all legislative matters and presides over the Committee of the Whole which has purview over matters concerning the DC Auditor, the District’s budget, the Department of Consumer and Regulatory Affairs, federal relations, planning and zoning, regional bodies (except WMATA and DC Water), the retirement system, statehood, and the University of the District of Columbia. The Committee shares jurisdiction over pre-k through 12 schooling with the Committee on Education.

Prior to becoming Chairman, Mendelson served eight years chairing the Council’s Committee on the Judiciary (2005-2012). In that role he was responsible for all legislation affecting criminal laws in the District, as well as oversight over the District’s public safety agencies, including the Metropolitan Police Department, Fire & Emergency Medical Services, the Office of the Attorney General, the Department of Corrections, and the Office of the Medical Examiner.

During his tenure on the Council, Chairman Mendelson has authored hundreds of laws. Major accomplishments include: establishing an elected attorney general and an independent Department of Forensic Science (the city’s crime lab); authoring Budget Autonomy, the District’s gun control laws (post-Heller), marriage equality, Universal Paid Leave, and the District’s tree canopy protection law; recrafting Mayor Bowser’s homeless shelter plan to close DC General, and former Mayor Gray’s plan to build the DC United Soccer Stadium; establishing the District’s first renewable portfolio standard for electricity generation; coordinating an increase in the minimum wage with Montgomery and Prince Georges Counties; and implementing the recommendations of the 2012 Tax Revision Commission that has made the District’s individual income tax one of the most progressive in the nation and reduced the business franchise tax by almost 20%.

Chairman Mendelson has also been a regional leader, serving twice as Chairman and three times as President of the Metropolitan Washington Council of Governments (MWCOG). Four times he has chaired the National Capital Region Transportation Planning Board. He is also a Past President of the Association of Metropolitan Planning Organizations (AMPO).

Chairman Mendelson believes that government should be an honest, efficient deliverer of services, and that the District should help those least able to help themselves to develop the skills to become self-sufficient and end the cycle of poverty. Chairman Mendelson also believes that government must accomplish this without increasing the tax burdens already shouldered by our middle-income residents. Throughout his years of public service, Chairman Mendelson has maintained that the District, as the nation’s capital, should be a model of service delivery in public education, public safety, and public health.

Chairman Mendelson has been an active participant in District politics since 1975, when he became an officer of the McLean Gardens Residents Association. In that role he was a large part of the effort to save that 43-acre housing complex from destruction. In 1979, Phil successfully ran for a seat on the Advisory Neighborhood Commission (ANC) and continued to serve as an ANC Commissioner until he took office as an At-Large Councilmember.

Chairman Mendelson came to the District from Cleveland, Ohio in 1970 to obtain a Bachelor’s Degree in Political Science from American University. He grew up in a family dedicated to public service. His mother was a national crusader for nursing home reform. His grandmother, who had been President of the Michigan State League of Women Voters, was appointed by President Roosevelt to the Federal Office of Price Administration, and was a founder of the Grand Rapids Urban League.